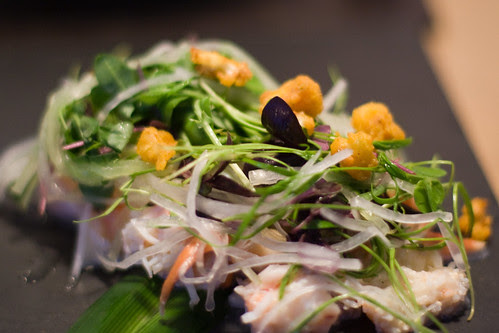 August happens to be my turn to choose where to eat out (we take turns) and i had decided, after much deliberation that I wanted Indian food. The problem was honing in on just one!

By the beginning of the month choices were narrowed down to 1) Tayyabs which I've heard lots of raves about in the twittersphere and blogosphere; 2) Jai Krishna which happens to be very local to where we live and was recently reviewed by eatlikeagirl; 3) Woodlands which one of my team mates at work recommends. Much like I ponder over what to cook next, i often have the same dilemma when deciding where to eat out. And what happened this time, is usually what happens in those situations: i cave in, eliminate the short list, and go for somewhere completely off the radar of any list/research/pondering.

That's how we made it to Trishna last Friday night. We decided to go all out and have a proper date, so we booked tickets for the Gay Icons show at National Portrait gallery. The show was curated by 10 Gay Icons who each chose 6 people in the last 150 years who had a positive influence on them. If you haven't seen it, please go -- for the photography and for the insightful descriptions of why each portrait was chosen. I found it affirming and inspirational and hope they have plans to tour the show to other places in the UK.

From the gallery we decided to walk to Trishna. It's in Marylebone, which i didn't know anything about neighborhood-wise. What i do know now, having walked there, is that it's on the posh side of things and if i were to compare with NYC which i am familiar with, is most like Upper East Side. The other thing i'm very curious about is why there is this concentration of designer kitchen stores all along Wigmore street. Of course we had to stop by each one and gawk and the mixer taps/sinks/cabinetry/ovens!

When we finally got to Trishna we were greeted by a friendly hostess and immediately taken to our table. The place was a bit on the empty side, though by the time we left it had filled with more diners. 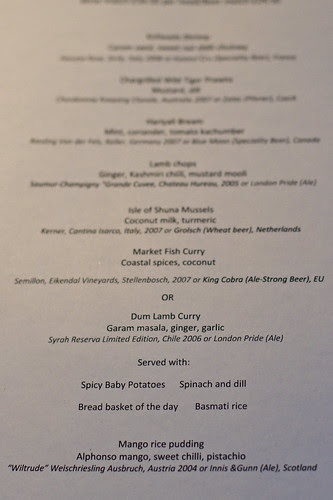 We took our time reading the menus. The wine menu was as interesting as the food menu and a nice feature was for each dish they suggested a wine and a beer to match. The tasting menu in retrospect would have been a better option for trying out a greater variety of their dishes, but we decided to choose our starters and mains ourselves. One starter, the Lobster and Crab Salad, was a no-brainer. Either kelsie or myself was going to order it, and it didn't disappoint. Generous morsels of sweet lobster and crab topped with a wild shoot salad and a citrus vinaigrette. This was one of the highlights of the evening. The other starters were a giant tandoori grilled prawn (yes a single prawn), and crispy quid. All of it was well seasoned and perfectly cooked. 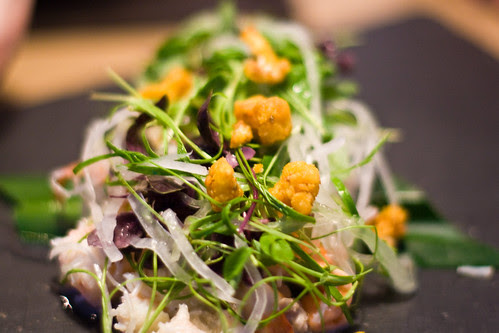 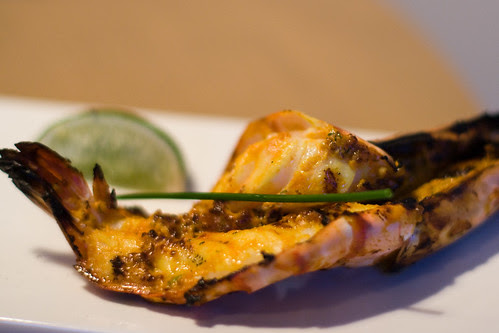 For mains, Kelsie opted for the seafood biriyani and i went for the market fish curry. That night the fish was bass. The generous fillets of fish were swimming in the curry sauce which had a good balance of spices and heat. I'd be hard pressed to name all the spices in it. The biriyani was served in it's own cast iron pot. Kelsie liked it even more with some of my fish curry sauce spooned over. We also ordered a side of dal (overpriced at £6!) and steamed basmati rice. 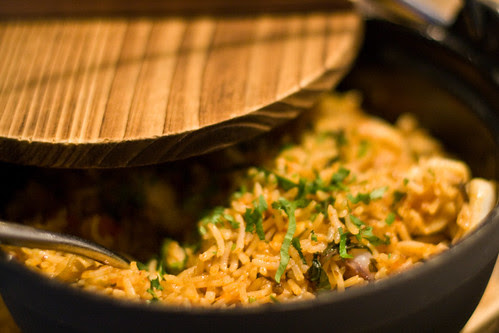 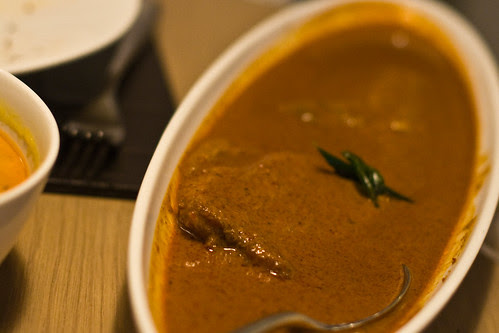 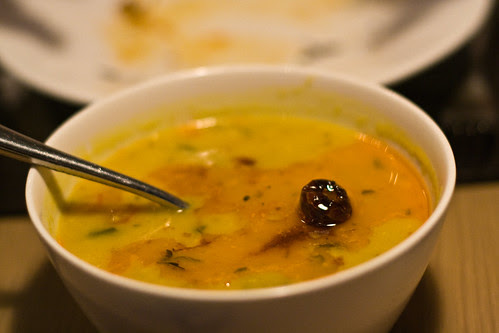 Dessert was the second highlight of the evening. We ordered a trio of ice creams: cardamom, ginger, and lime/basil. Unfortunately the dessert wine we ordered along with it clashed with all three flavours. But the ice creams were tasty and have inspired me to try more flavour combos next time i make a batch.

The final bill came to £138 for two glasses of prosecco, a bottle of albarino, a bottle of sparking water, one glass of dessert wine, three starters, two mains, the dal, the rice and the dessert.

Pros: a good variety of dishes with extensive starters menu for sharing; nice wine/ber pairing suggestion.
Cons: at times, overattentive service: for instance having our glasses refilled all the time. we prefer a more informal style. and some dishes, like the dal were on the expensive side.
Will we go back? Not sure. There weren't enough wows to balance out the spend.

Very glad to see this post (But zebra meat? you've got to be kidding.That's so East Africa.). Can you tell me what wines you liked with which dishes?
Thanks.
Fran Osseo-Asare
fran@betumi.com
www.betumi.com/blog.html

What gorgeous photos! Trishna was on my wishlist when it first opened but I haven't read enough positive reviews to make me want to eat there...

kelsie and mel
currently residing in Sitges, Barcelona, but equally at home elsewhere., Spain
Kelsie: seasoned traveller who is open to exposing her tastebuds to a wealth of richness and flavour. Likes the visual aspect of life and food. Dislikes bovril, scottish pride white bread and people who resign themselves to eating the same old stodge week in week out. Mel: born in the usa (yah she loves the boss too) and very well versed in all that is good and edible. Trained cook but equally and perhaps more importantly experienced in making and eating good food. Her mother first taught her to cook and her mother knows a lot, trust me! Likes collecting cookbooks. Dislikes people who don't know what a chickpea is.